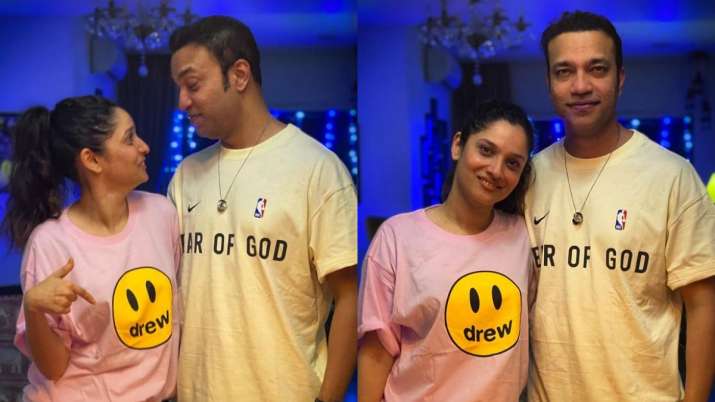 Actress Ankita Lokhande and boyfriend Vicky Jain are one of the much-adored couples of the small screen. Every now and then, they share lovable posts on social media and catch the attention of their fans. Yet again, they did the same when they posted cute pictures on Instagram wearing twinning t-shirts. The ‘Pavitra Rishta’ actress wore a peach tee and jeans where her beau Vicky, on the other hand, opted for a cream t-shirt and denim. It wasn’t just the picture but also the cute caption that grabbed eyeballs. Alongside one of the images, she wrote, “The tides move in harmony with you’,” while the caption of the other one read, “Worlds change when eyes meet.”

The pictures were clicked at their house where the two of them were seen standing next to a table on which there was a lighted candle and a cake. The post caught the attention of not just their fans but also their friends including actor Sana Makbul who wrote, “My cutieeeess @lokhandeankita and my BFF @jainvick god bless you both” and TV actor Ashita Dhawan who commented, “Beautiful edit.”

Have a look at their photo here: