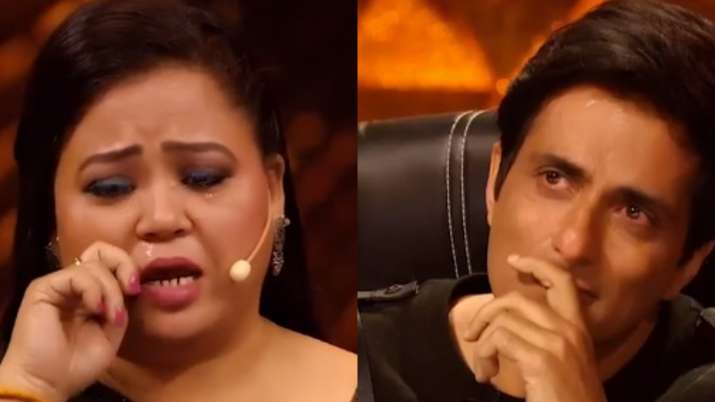 Comedian Bharti Singh who is currently hosting the dance reality show Dance Deewane 3 was seen crying and recalling how she feared that her mother would die of Covid-19. Bharti and her husband Haarsh Limbhachiyaa have replaced the original host of Dance Deewaane 3, Raghav Juyal, after he tested positive for Covid-19.

In the video Bharti says in Hindi, “Ye Corona itna rula raha hai, itni jaane le raha hai. Meri khud ki mummy ko Covid ho gaya tha. Mummy ka phone ata tha ki saamne ek uncle hai unki death ho gayi. Mummy roti thi. Mere ko ye darr tha ki mere ko to ye phone nahi aega na. Itna zyada tod diya hai Corona ne (Corona is making us all cry so much, it’s taking so many lives. My mother also contracted the virus. She used to phone me that a neighbour died and she would cry. I was scared what if I also get a call like this. Corona has broken us all so much).”

Recently, Sonu Sood was welcomed on the show as the guest judge. Amid the Covid-19 crisis in the country, the contestants paid a heartfelt tribute to the Covid warriors on the show. They also thanked Sonu Sood for his supporting the people who are under crisis due to Covid-19.

In an earlier promo, contestants were seen giving a special tribute to the police and doctors of our country.

In March, at least 18 members of the Dance Deewane 3 crew had reportedly tested positive to the virus.