Bollywood actress Sara Ali Khan leaves no stone unturned to entertain her fans. From sharing ‘Who’s there?’ videos to funny captions Sara is always there to give a laugh riot. On Monday, the actress treated her fans with her ‘devil’ avatar. Sara took to her Instagram stories and shared a boomerang video. Sharing the clip, Sara used ‘Resting witch face’ and ‘I’m the devil’ GIFs.

In the video clip, Sara can be seen donning a face filter of a devil. She added Alicia Keys popular track ‘Girl on Fire’. 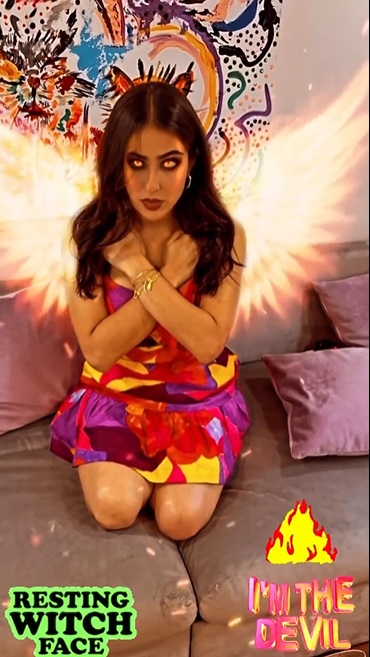 Earlier, the actress also shared a video lifting her bestie. The video shows Sara Ali Khan, wearing a bring printed short dress, picking up her friend with both her hands and lifting her up. The friend has her hands around the actor’s neck for support as the actor says: “Sara, just try.” However, her scared friend is heard saying: “Put me down.”

The caption with the video clip reads: “Dead weights or dead lifts. 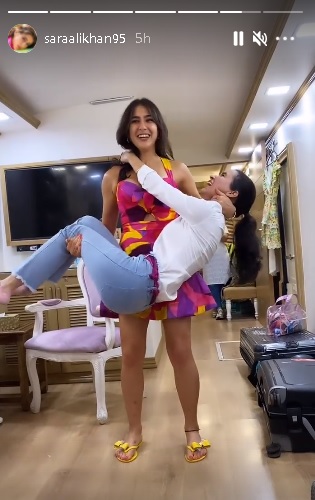 On the work front, Sara Ali Khan was last seen in Coolie No 1 opposite Varun Dhawan. She will next be seen in Akshay Kumar and Dhanush starter Atrangi Re. The film is directed by Anand L. Rai.

This is the first time Sara and Akshay are working with director Anand L. Rai, while the filmmaker has worked with Dhanush earlier in the 2013 film “Raanjhanaa”.

Sara recently shared a picture on her Instagram that was clicked by her Atrangi Re co-star Akshay Kumar. Sharing the picture Sara wrote in the caption, “Thought these days would never end #bts #atrangire: @akshaykumar sir.”

Atrangi Re went on floors in March 2020, in Varanasi. The team resumed shoot in October post lockdown in Madurai, followed by schedules in Delhi and Agra. The film is written by Himanshu Sharma and the music is by Academy Award-winning composer AR Rahman. The lyrics are penned by Irshad Kamil.

The film is scheduled to release on August 6.