Ace fashion designer Manish Malhotra from the last 30 years of his career has been the person behind the beautiful costumes adorning our favourite celebrities. Well, he is now starting a new chapter of his life by taking the responsibility of donning the director’s hat. Yes, that’s true! The ace designer is all set to make his directorial debut with his dear friend and filmmaker Karan Johar-led Dharma Productions. The story of his film happens to be an intense musical love story, set in the backdrop of the partition. Taking to Instagram on Friday, actress Janhvi Kapoor shared a congratulatory message for the fashion enthusiast and also remembered her late mother and iconic actress Sridevi.

Taking to the photo-sharing application and sharing a never-seen-before picture and wrote, “Congratulations Manish Malhotra on this new journey. Can’t wait for the world to see all the knowledge and love you have for films and see the magic that you create with it. It’s going to be so special.”

Have a look at the same here: 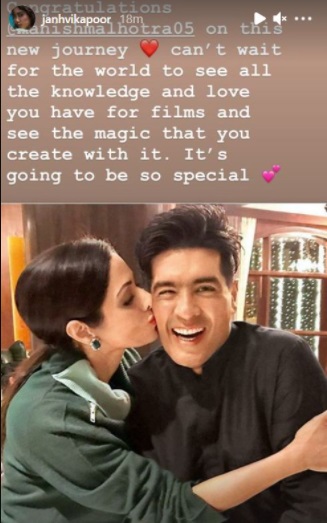 A report in Hindustan Times said that Malhotra’s film will come with a splash of grandeur and elegance. The report read, “The story and screenplay of this intense musical love story, set in the backdrop of the partition, is also written by Malhotra. He has already envisioned the entire screenplay ready in his mind and casting for the film will begin shortly.”

Speaking about Manish Malhotra, he has designed outfits for actresses like– Kareena Kapoor Khan, Kajol, Raveena Tandon, Aishwarya Rai Bachchan and even Alia Bhatt, Janhvi, etc.  Be it skirts or crop tops, sarees to lehengas, he has always set fashion goals in the fashion industry.

It will surely be exciting to see what the designer-turned-director will unleash on the screen.

Jay Bhanushali, Monalisa open up on their roles in ‘Dhappa’