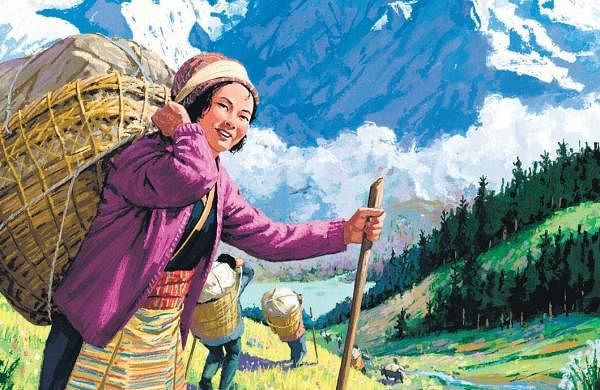 CHENNAI:  Nanga Parbat, named for the ninth-highest mountain in the world, is a two-player game designed by Steve Finn. In this game, players take on the roles of Sherpa communities that live on and around the titular mountain you’ll hunt game, set up base camps and try to have more points than your opponent when the game ends.

What’s interesting about Nanga Parbat, it’s immediately clear, is the foundation it’s built on; specifically, that of ultimate tic-tac-toe. Ultimate tic-tac-toe (which goes by other names as well), if you’re not familiar with it, is essentially a giant tic-tac-toe grid where each space also contains a miniature tic-tac-toe board. Whoever wins, for example, the game in the centre space gets to mark an X or an O in that space on the larger grid. However, the hook is that the space you choose to claim also dictates where your opponent must play their next move, and that same twist is what Nanga Parbat has incorporated.

Instead of a grid, you have six areas that comprise the various regions of the mountain arranged in a 3-2-1 pyramid; each region itself consisting of six spaces that hold various animals that can be hunted. The active region, indicated by the presence of the Guide token, is where the current turn must be taken. For example, if on my turn I choose to claim the topmost space in region #6 (the rightmost one on the lower level), I will then move the guide to region #1 for my opponent’s turn.

The reason I’ve spent so long talking about this mechanism is because it’s at the heart of what makes this game an absolute joy to play it’s incredibly tight, and every move you make has to be carefully weighed not only for its immediate benefit to you but also the opportunities that it might afford to your opponent. It almost feels claustrophobic at times, because of how intertwined each turn feels with those that came before and will come after. This is one of the most interactive two-player games I’ve ever played, which leads to some great moments when you’re able to force your opponent to set you up for a
better play.

The cleverness doesn’t stop there, thankfully. Each animal you hunt can be used to activate a special power that lets you manipulate the game state in some way, which adds another layer to the calculations necessary. Points are what you need to win, though, and each player only gets the chance to score five times during the game – making timing a massive part of Nanga Parbat, because if you leave it too late, your opponent might sneak in before you.

Steve Finn is best known for Biblios, which is a game I’ve spoken about here before and also happens to be one of the best card games I’ve ever played. The only real criticism of Biblios that I’ve ever made is that it doesn’t play particularly well as a two-player game; but, with Nanga Parbat’s release, Steve Finn proves that he can create a duel as engaging and as fun as anything else out there.

Galaxy Trucker
Galaxy Trucker is a phenomenal game, and one that’s permanently on my need-to-play-this-more list, which is why I was quite excited to hear that CGE is planning a new streamlined edition that makes the game more accessible and easier to get started with for new players.

My Father’s Work
Renegade Game Studios doesn’t typically use Kickstarter, but it’s easy to see why they chose to crowdfund My Father’s Work this is clearly a passion project with a supremely deluxe treatment. According to the marketing material, this is a game about being multiple mad scientists in the Victorian period, as you’ll play the descendants of the original disturbed doctor trying to complete their ancestor’s work.

(Arjun is a gamer, book lover and an all-round renaissance man)