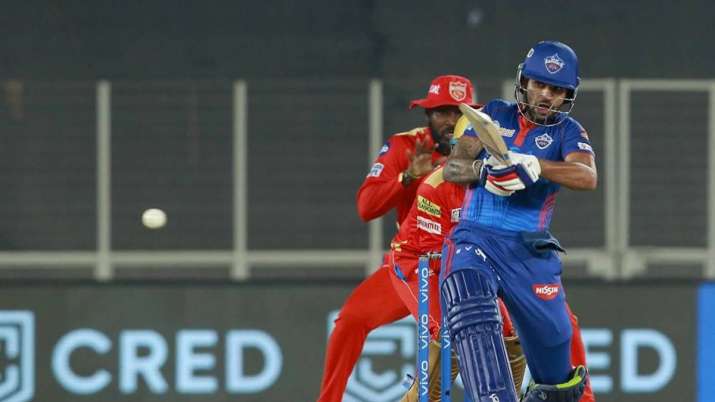 Chasing a 166-run total, Delhi’s vaunted openers flew out of the traps as they added 63 runs for the opening wicket. The Delhi outfit stuttered a bit after losing Shaw (39), Steve Smith (24), and skipper Rishabh Pant (14).

However, Shimron Hetmyer finished things off in style, smashing two sixes and a four against Riley Meredith in the 18th over as Delhi got to the target with 14 deliveries to spare.

Earlier, Mayank Agarwal got his mojo back to hit an unbeaten 99. Leading the side in place of KL Rahul, Agarwal stepped up with a stroke-filled innings to take his side to 166 for six in 20 overs.

After losing Prabhsimran Singh  (12) and ‘Universe Boss’ Chris Gayle (13) in the PowerPlay, Agarwal and debutant Mayank Agarwal steadied Punjab’s tottering run-flow with a 52-run partnership for the third wicket. Malan, the top-ranked T20I batsman, scored run-a-ball 26 before falling prey to Axar Patel in the 14th over.

Two deliveries later, Punjab lost their fourth wicket in the form of Deepak Hooda (1). A mix-up between Agarwal and Hooda resulted in the latter’s dismissal. In an attempt to steal a quick single, both the batsmen found each other on the same end, leaving Punjab in trouble at 88/4.

Despite not getting support from the other end, Agarwal dropped the anchor and rushed towards the end. The stand-in captain capped Punjab’s innings with a 23-run last over, where he hammered Avesh Khan for a couple of boundaries and a maximum.

Agarwal became only the second batsman after Suresh Raina in 2013 to end an innings on 99. Though he fell short of a well-deserved hundred, the Punjab outfit notched up 64 runs in the last five overs to reach a competitive 166-run total.

On the bowling front, Kagiso Rabada plucked three wickets while conceding 36 and Axar put up a clinical bowling performance to end up with figures of 1/21 in his four overs.