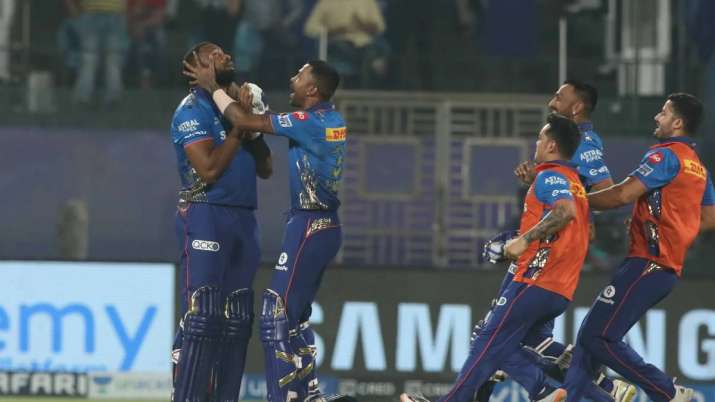 Kieron Pollard’s blistering 87 off 34 deliveries helped defending champions Mumbai Indians pull off their highest ever run-chase and register a four-wicket win over Chennai Super Kings at the Arun Jaitley Stadium in Delhi.

Pollard, who notched up his top IPL score, pulverized the opposition with 6 fours and 8 sixes as MI chased down a daunting 218-run total on the last delivery of the innings. Quinton de Kock (38) and skipper Rohit Sharma (35) started off well, posting 71/1 for the opening wicket. Krunal Pandya also chipped in with a 23-ball 32 but it was Pollard’s storm that turned it around in the high-scoring thriller.

Earlier, Ambati Rayudu blazed away to a 27-ball 72 as CSK gathered 82 runs in the last five overs to post an imposing 218 for four. Moeen Ali (58) and Faf du Plessis (5), too, struck blistering half-centuries after being asked to bat first.

CSK lost opener Ruturaj Gaikwad (4) early but South African du Plessis and England’s Moeen plundered runs at will during their 108-run second-wicket partnership. Rayudu, who notched up his fifty in just 20 balls, went hammer and tongs with seven sixes and four fours during his stay in the middle.

To start with, du Plessis smashed Dhawal Kulkarni for a four and maximum, as CSK grabbed 11 runs in the second over.

Moeen also opened up his arms in the third over, hammering Trent Boult (1/42) for a maximum over backward square-leg and a boundary, as Chennai fetched 12 runs off it.

Moeen was the more aggressive of the two as CSK cantered to 49/1 after the powerplay. The southpaw kept playing his shots at will. Moeen, who used the pull shot to perfection and du Plessis, were brutal on leg-spinner Rahul Chahar (0/32), striking a six each in the ninth over, as CSK amassed 16 runs and raced to 77/1.

There was no stopping Moeen, who then smashed a six and two boundaries off James Neesham (0/26) in the 10th over, while Du Plessis hit two successive sixes and a boundary off Jasprit Bumrah (1/56) in the next. This was Bumrah’s most expensive spell in the IPL.

But Mumbai pegged back CSK by taking three quick wickets — first Bumrah dismissed Moeen in the 11th over and then Kieron Pollard removed du Plessis and Suresh Raina (2) in successive balls in the 12th over, as CSK slipped to 116/4.

Then the show belonged to Rayudu, who, along with Ravindra Jadeja (22 not out), added 102 runs for an unbroken fifth wicket in very little time. CSK scored 92 runs in the last six overs as all the Mumbai Indians bowlers experienced an off day in the field.