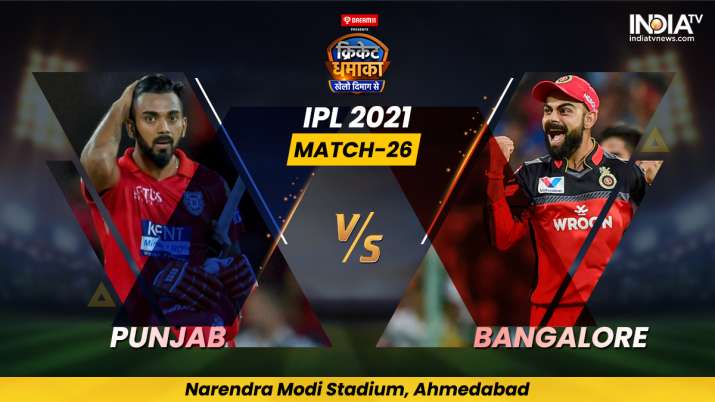 PBKS vs RCB IPL 2021 Live Online: Royal Challengers Bangalore, one of the most consistent sides of the ongoing IPL edition, will take on an inconsistent Punjab Kings unit at the Narendra Modi Stadium on Friday. After four losses and two wins, Punjab are currently placed sixth in the points table with four points, whereas RCB are third with 10 points from five wins. The Bangalore outfit, led by Virat Kohli, has never looked so confident in the pursuit of maiden IPL title. With Devdutt Padikkal at the top, AB de Villiers in the middle, and Mohammed Siraj taking care of the bowling contingent, RCB will be favorites to clinch this encounter and consolidate their position in the league table.

RCB have won five of the six matches they have played with their only loss coming against Chennai Super Kings. PBKS, in contrast, have been let down by inconsistent performances. They’ve lost four out of their six matches so far in the tournament. Skipper KL Rahul will hope to get support from Mayank Agarwal and Chris Gayle at the start. Their bowling unit including veteran Mohammed Shami and young Ravi Bishnoi will also be put to the test against a potent RCB batting camp. Punjab Kings come into this game after losing four out of their six matches. [LIVE STREAMING]

Match 26 PBKS vs RCB IPL 2021: Punjab Kings will have to play out of their skins to get their stuttering campaign back on track when they face a high-flying Royal Challengers Bangalore in the Indian Premier League here on Friday. Smarting from a five-wicket defeat at the hands of Kolkata Knight Riders, it will not be an easy task for a struggling Punjab side to stand up to the challenge thrown by an RCB team, which has been firing on all cylinders.

Following four losses and two wins, Punjab are currently placed sixth in the league table with four points, whereas RCB are second with 10 points from five wins, only behind Chennai Super Kings on net run rate. [FULL PREVIEW]