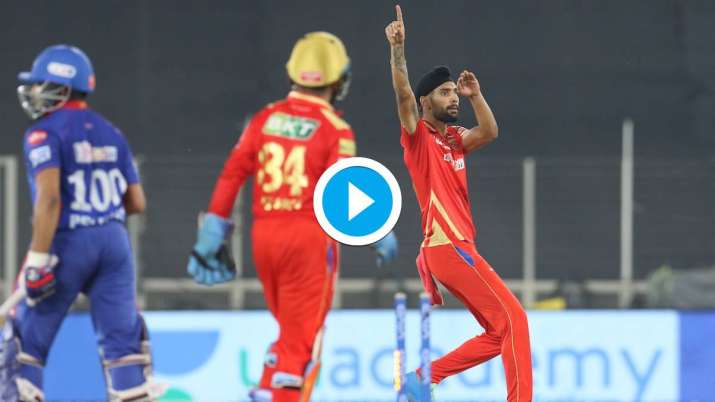 Young left-arm off-spinner Harpreet Brar’s clout has instantly started growing in the IPL 2021 as after his heroics against star-studded batting line-up of Royal Challengers Bangalore, he scalped another big prize in in-form Prithvi Shaw.

The 25 year-old Punjab spiner, who took 3/19 against RCB that included wickets of Virat Kohli, Glenn Maxwell and AB de Villiers, dismissed Delhi Capitals’ in-form off-spinner by rattling his stumps at a crucial juncture of the game.

Shaw, who scored a mesmerising 41-ball 82 last Thursday against Kolkata Knight Riders, has enjoyed a fantastic form in domestic season and it took special effort from Brar to stop him on Sunday when Shaw was running away with the match for DC with a 22-ball 39 inside the powerplay.

However, Brar made the most out of Shaw’s habit of going too far to the leg-side to access the off stump; missing the ball while driving as this one turned and escaped the edge to hit timber.

Earlier in the match, Shaw and Dhawan provided perfect start to DC in the run chase. Shaw, who was the aggresor in the 63-run opening stand of 37 deliveries, shot three boundaries as many sixes while Dhawan slammed four fours as DC were right on the track to chase 167 set by PBKS.

Stand-in skipper Mayank Agarwal, who took over captaincy duties in place of injured and out KL Rahul, scored a 58-ball 99 on the night but lack of help from the other end meant they couldn’t impose a huge total on the board.