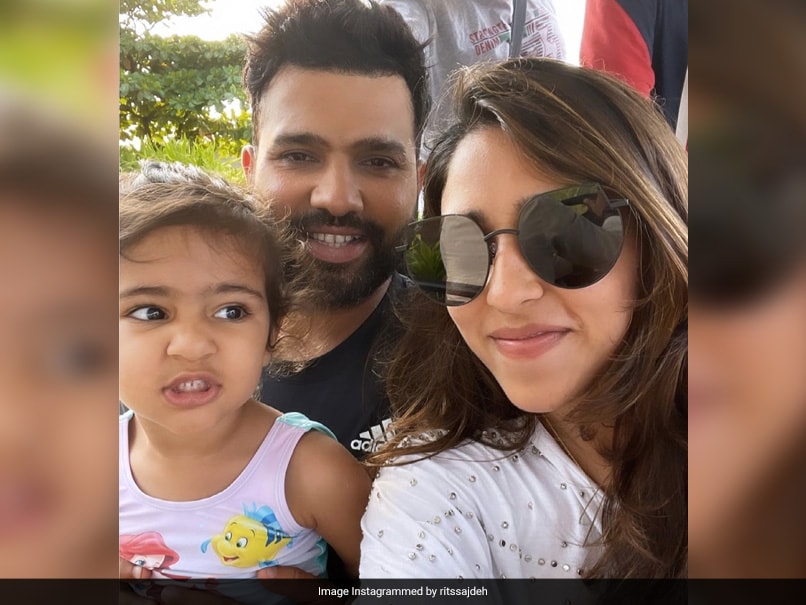 Ace cricketer Rohit Sharma rang in his 34th birthday on 30th April 2021. It was an occasion to celebrate for the captain of the Mumbai Indians team currently preparing for their upcoming IPL 2021 matches. Customary birthday wishes poured in for Rohit Sharma from his family, friends and cricket stalwarts such as Harbhajan Singh and Suresh Raina. The ace cricketer celebrated his special day with his near and dear ones by his side, and two cricket-themed cakes! Take a look at the pictures from the celebrations:

The pictures from Rohit Sharma’s birthday celebrations were shared on Instagram by his wife Ritika Sajdeh and cricketer Suryakumar Yadav’s wife Devisha. We could spot two delicious cricket-themed cakes in the boomerang video clip. While one cake was based on the cricket pitch, the other one depicted what seemed to be a cricket stadium. Rohit Sharma was all smiles cutting the delicious and funky cakes. Not just was the cake eaten by those present, but the creamy delight also ended up on the birthday boy’s face! “Happy birthday. Lots of love,” wrote Ritika Sajdeh in the adorable picture.

Rohit Sharma is a right-handed opening batsman of the Indian Cricket Team. His incredible talent and skills have won him international recognition and an immense fan following in the country too. He also holds multiple titles in the short format IPL games such as the most sixes by an Indian as well as the most ‘Man of the Match’ awards. On the personal front, Rohit Sharma had tied the knot with Ritika Sajdeh in December 2015. They are parents to a 4-year-old daughter, Samaira Sharma.

About Aditi AhujaAditi loves talking to and meeting like-minded foodies (especially the kind who like veg momos). Plus points if you get her bad jokes and sitcom references, or if you recommend a new place to eat at.