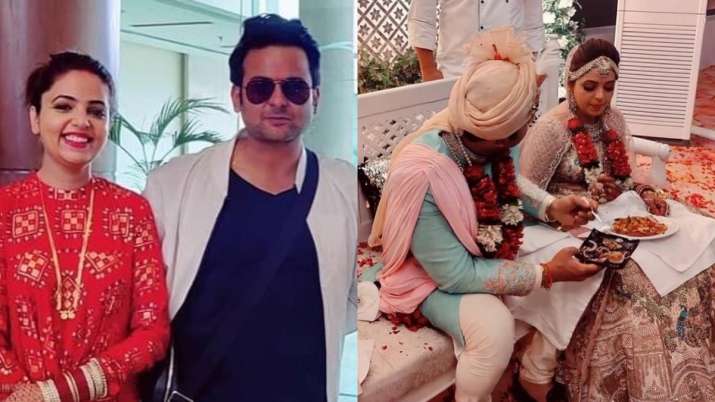 A newlywed couple of the tinsel town Sugandha Mishra and  Dr Sanket Bhosale have been busy in performing their post-wedding rituals. Although the couple got married on April 26, the celebrations are still going on. The wedding took place at Sugandha’s place in Jalandhar, Punjab. Recently, the couple had a Satyanarayan puja at the home following which Sugandha prepared Punjabi and Maharashtrian sweet dishes for Sanket’s family as a  part of the ritual where the new bride cooks something sweet for the groom and his family.

While sharing her experience of being a new bride Sugandha told ETimes, “I am understanding and inculcating the traditional Maharashtrian ways. I am excited about being a Maharashtrian baiko (laughs!).” She further revealed that she made panjiri for her in-laws and other family members. She said, “It’s a traditional Punjabi sweet dish, which we make during a puja. It’s served as prasad. I am glad that everyone liked it. Eventually, I prepared a Maharashtrian sweet dish as well. It was a great mix of Punjabi and Maharashtrian dishes on the table.”

The couple has been sharing some beautiful pictures and videos from their wedding ceremonies. Recently, Sanket took to her Instagram and shared a funny video. He captioned the video, “Boys .. Just After Marriage.”

Sugandha also posted photos of her D-Day, which received immense love from her fans and friends from the industry. Check them out here: