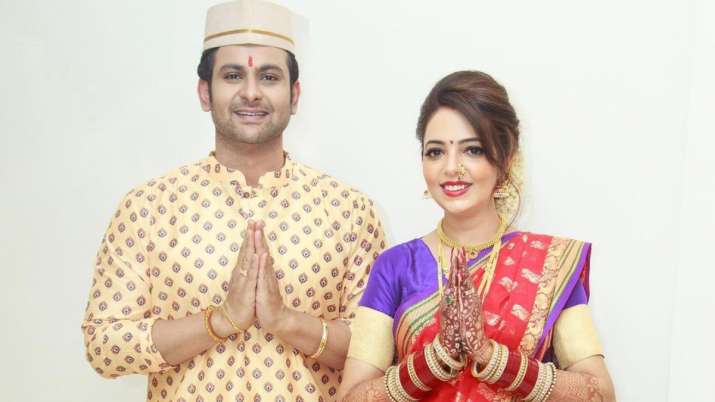 Comedian couple Sugandha Mishra and Sanket Mishra tied the knot a few days back. The newly wed couple are enjoying their marital bliss and sharing the glimpse of the same on social media. The couple is actively sharing pictures and videos from their wedding and their pre-wedding festivities. On Tuesday, Sugandha posted a few photos and videos from her post-wedding rituals. In the pictures, Sugandha looked beautiful as a newlywed Marathi bride. She opted for a bright red traditional Nauvari saree along with a Maharashtrian nose pin, also known as the Nath. Sanket, on the other hand, sported a printed kurta and pyjama.

Sharing the picture, Sugandha said, “Itne Pyaar ke liye Dhanyawad.” For the post wedding rituals, Sugandha was seen taking their her first steps into the house as a bride and preparing her first meal for the family.

Sugandha, recently prepared for her ‘first rasoi’ in which she cooked ‘Panjiri’ for everyone in the family.

For those unversed, Sugandha and Sanket exchanged wedding vows on April 26, 2021, in the presence of their family members and friends. Keeping in mind all the necessary precautions, the couple made their guests go through an RT-PCR test for COVID. They were to tie the knot last year but the pandemic changed their plans.

Meanwhile, on the professional front, Sugandha was a contestant in the fourth season of The Great Indian Laughter Challenge and is popular for her mimicry. Whereas, Sanket has hosted the show, Baba Ki Chowki and been on The Kapil Sharma Show and Gangs of Filmistaan.