Taapsee Pannu is not new to trolls. There have been multiple occasions when she has been subjected to social media abuse. However, it was only recently, when her boyfriend Mathias Boe was targeted by online trolls. As Taapsee announced her first project as a producer, many came in to congratulate and encourage the actress. Mathias Boe was also one of them.

Taapsee wrote on Instagram, “Here we are! The man who runs the show for “Outsiders Films” while I’m allowed to boss around. Pranjal and I will be treading that thin line between friendship and business together.”

Reacting to Taapsee’s post, Mathias wrote, “I will do a movie for free. Hit like if you want to see me in a Bollywood movie.” Replying to Mathias, an Instagram user said, “I can’t believe she is dating you man. She is so precious but it doesn’t matter how intelligent a girl is, there comes a time when she can’t decide between right and wrong. I think it was that time when you found her.”

Mathias had a perfect response for him. “Hi man, yes you are 100% right.” Later he shared a screenshot of it on Instagram stories writing, “When you get trolled by a keyboard warrior just agree with him.” 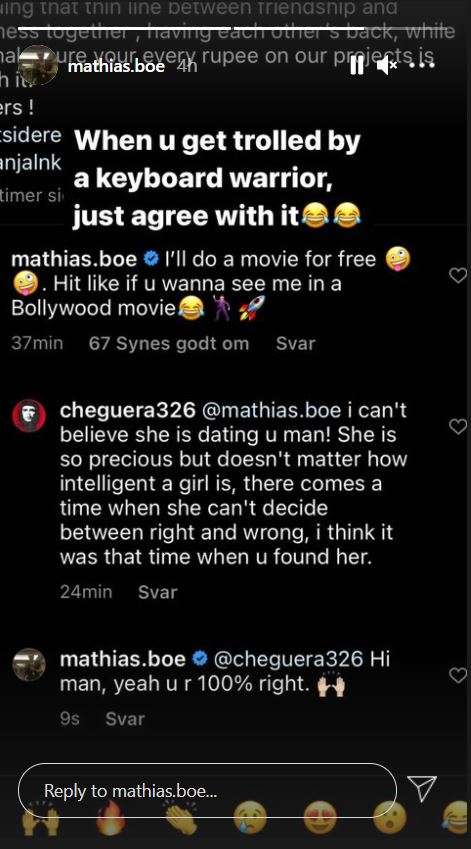 Taapsee Pannu will be seen in the upcoming film “Blurr”, which will be bankrolled by her newly-announced production company Outsider Films. The film will be helmed by director Ajay Bahl, best known for his 2019 release, “Section 375”.

Talking about the film Taapsee said: “‘Blurr’ is the just kind of script I was waiting for. I’m delighted to be finally turning a producer with this film and with the support of co-producers and team, I am sure it’s going to be an enriching journey.”

“Collaborating with Ajay is as exciting as it gets as I’ve seen his work. He is the best to bring the gripping story of Blurr on-screen,” she added.

“Blurr” is jointly written by Pawan Sony and Ajay Bahl. It will go on floors soon.