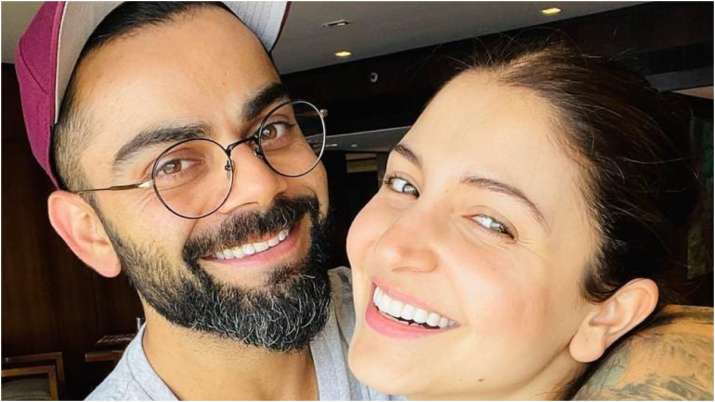 Virat Kohli is too filmy and dramatic. If you have been following cricketer’s antics on the field, you would have an idea how super loving he is. Virat completed his half-century against Rajasthan Royals during the Indian Premier League 2021 match at the Wankhede Stadium on April 22. Adding a sweet twist to the same, the Royals Challengers Bangalore captain blew a kiss to wife and actress Anushka Sharma who was sitting in the pavilion. With the cute gesture, he signalled that he is dedicating his knock to daughter Vamika and wifey. Well, there was ‘drama within drama.’

As soon as the video went viral, fans loved the gesture and were in awe of the cricketer. Fans shared the video of Virat making baby rocking motion. With his half-century, Virat Kohli became the first batsman in the IPL to reach the 6000-run milestone and also, RCB won the match.

Both Anusha and Vamika have joined the RCB bio-bubble and have been accompanying Virat on the ongoing IPL season.

Virat Kohli and Anushka Sharma are one of the Internet’s most favourite couple and the duo never cease to impress their fans with their chemistry.

Meanwhile, recently Anushka gave a glimpse of what her 2020 looked like with her cricketer husband and shared snapshots from last year, featuring Kohli along with a few of their pawdorable friends. Anushka posted a video on Instagram, where Virat and the actress are seen enjoying their time with pet dog Dude and some strays they found during their travel. In the clip, they are seen feeding puppies and playing with them.

The couple had welcomed their first child, daughter Vamika, earlier this year, and the actress returned to work recently.

On the professional front, Anushka recently returned to action after her maternity break. She has two films in the pipeline. She will be seen in Navdeep Singh’s “Kaneda”, and a biopic of cricketer Jhulan Goswami. The actress was last seen in the film “Zero” in 2018. She produced the web series “Paatal Lok” and the film “Bulbbul” for OTT last year.