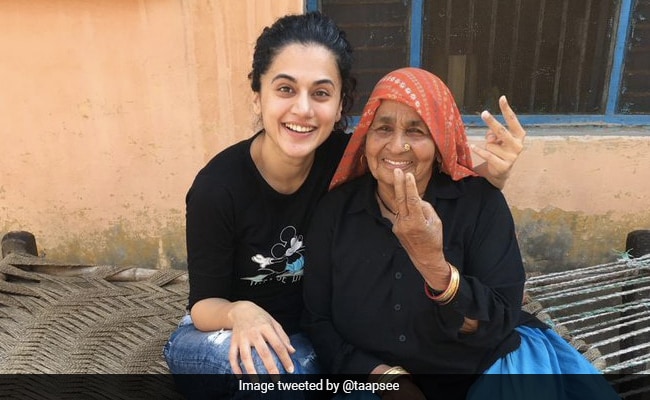 A throwback of Taapsee with Chandro Tomar. (courtesy taapsee)

Sharpshooter Chandro Tomar, who was popularly known as “Shooter Dadi”, died on Friday at the age of 89. She had contracted the virus and was hospitalised due to breathing trouble. Chandro Tomar’s sister-in-law Prakashi Tomar tweeted on Friday, “Mera sath chhuth gaya. Chandro kahan chali gayi.” Meanwhile, Taapsee Pannu, who played the role of the late sharpshooter in a 2019 film called Saand Ki Aankh, in her eulogy for Chandro Tomar, wrote on Twitter: “For the inspiration you will always be… You will live on forever in all the girls you gave hope to live. My cutest rockstar May the love and peace be with you.”

For the inspiration you will always be…
You will live on forever in all the girls you gave hope to live. My cutest rockstar May the and peace be with you pic.twitter.com/4823i5jyeP

Prakashi Tomar announced the death of her sister-in-law by sharing this post on Twitter. Chandro Tomar began shooting when she was over 65 years old.

Bhumi Pednekar, who played the role of Chandro Tomar’s sister-in-law Prakashi Tomar, shared a chunk of memories from the sets of the film and she wrote in her post: “You will be missed so much. Forever Chandro Tomar #ShooterDadi.”

You will be missed so much
Forever #ChandroTomar#ShooterDadipic.twitter.com/zM9nEhq5Ic

The film Saand Ki Aankh was based on the lives of sharpshooters Chandro and Prakashi Tomar, who were arguably the oldest shooters in the country and participated in over 30 national championships. Taapsee Pannu played Prakashi Tomar while actress Bhumi Pednekar starred as Chandro Tomar in the film.

The film marked the directorial debut of Tushar Hiranandani, who is known for writing films like Ek Villain and Dishoom.Saand Ki Aankh was co-produced by Anurag Kashyap. Saand Ki Aankh received favourable reviews from critics when it opened in theatres and the lead actresses also garnered praise for their performances in the film. Taapsee Pannu had earlier described the film as the “first biggest experiment of her career.”